This site is by, for and about Ed Bemand, writer of obscenity, dabbling artist, dilettante esotericist and eternal seeker of the Lost Cave of Naar.

Born and raised in Guildford, at school I wasn’t voted anything. At 18 I fled to Lampeter where I was loosely associated with the archaeology department of the university for three years. After that I was subjected to stern lectures about hard work and the need to earn a 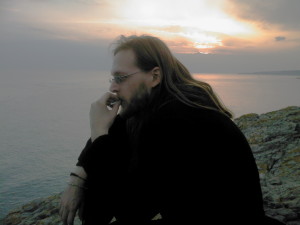 living, which led to my artistic pretensions being sidelined. Unable to find a way to earn an honest living, my absence of useful skills and qualifications led me to work in sales. Despite my better judgement and moral qualms, I spent time selling such diversities as computers, double-glazing, ID cards and worthless insurance.

My first novel Beheld was published when I was 24. Unfortunately, it failed to make me either rich or successful, so I continued to make many phone-calls to disinterested parties each day in order to convince them to part with money for whatever I was touting at the time.

After a decade of drudgery, I was only too happy to cast aside any facade of respectability in favour of what can loosely be classed as self-employment as a writer, but also means more lie-ins. This makes it harder for me to use day-jobs as an excuse for not getting any writing done, so I’m hoping that I’ll be able to make some progress through my pile of unfinished projects.

Chance has led me to Cardiff where I’ve lived for the last few years with a girl and a dog.