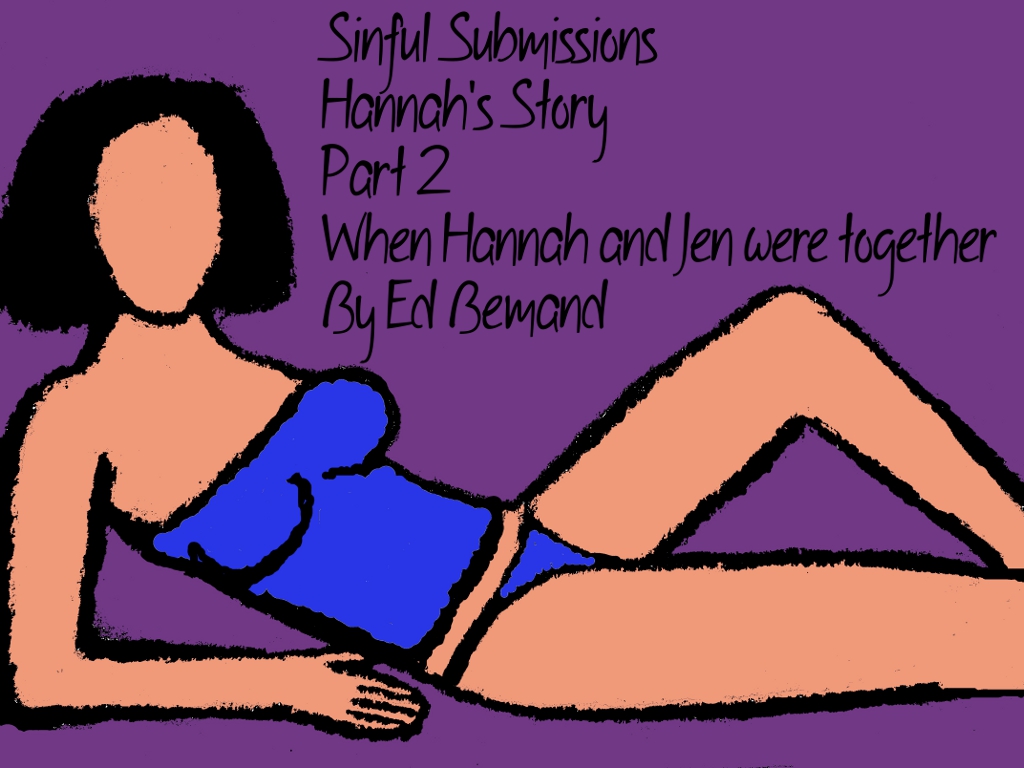 The evening after Hannah and Jen shared their second night together, Jen was due to have a liaison with an old friend and semi-regular fuck buddy. They had arranged it about a week ago, before she had met Hannah. She could have cancelled it but that would have made it seem too much like she was in something serious. Deep down she knew that she was mostly just doing it to prove that she could. She went along to it and made no secret of what she was doing to Hannah but her heart wasn’t in it.

Her mind kept wandering and she found it difficult to focus on the pleasure in front of her. Her friend was used to the peculiarities of Jen’s mind and the sporadic nature of her passion and attention and didn’t take it too personally. When pressed, Jen reluctantly admitted that she had someone else on her mind. Her friend was sensible enough to tell Jen what she needed to do. It sounded ridiculous at first but she couldn’t deny that Hannah had stirred something unexpected in her. She left and went to find Hannah.

It was late at night and Hannah was asleep. Jen was persistent and kept pressing the doorbell until Hannah answered the door in a dressing gown looking still half asleep.

“Of course. Is something wrong?”

Jen pushed passed her into the room and Hannah shut the door behind her. Jen practically flung herself at Hannah, kissing her hungrily.

There was a hunger and passion between them that night, they were both active participants, craving sensation and lusting for each other. Their bodies formed a circuit, each with their mouth against the other’s pussy. It was a feedback loop. The pleasure they stimulated drove each to new heights and greater efforts. There was no place for shyness, fear or embarrassment.

Afterwards they kissed, the juices of their passion mingling between their lips. They could taste the combination of their lusts on each other and they loved it.

They lay curled in each other’s arms, their bodies against each other, legs entwined, breasts pressed together. Their pussies touched and the lingering charge from before was rekindled. They found themselves moving with each other, exerting delicious pleasure as wet skin rubbed wet skin. Exhausted by passion’s labours, they spent hours slowly rubbing against each other, drawing forth soft whimpers and moans from each other at each new climax. It was a long night and what sleep they had was fitful dozing. By morning they were lying together dazed and drained of all lust. Neither wanted to let go of the other. It felt as though they had poured out their very souls together.

“This isn’t that different from what we’ve done already. Don’t you want to feel me in your pussy?”

“Now lie back and open yourself for me, I want to fit my cock all the way inside you. Can you take it all?”

Jen stroked Hannah’s body with her fingers, parting her legs and gathering the moisture that was forming between them. She smeared Hannah’s juices all over her pussy then positioned the head of her cock at her opening.

They spent a lot of time in bed together in the weeks that followed.

Hannah took great pleasure in the perfect smoothness of Jen’s pussy. She was tempted to emulate it and shave herself completely, but she found she preferred to keep the hair over her pussy, though she kept it trimmed and took care over removing stray hairs from around her lips.

One night, at the tail-end of a particularly enjoyable session of love-making, Hannah said something. Something that scared Jen, but then, so much of what had been happening recently was scary and new to both of them.

Hannah looked deeply into Jen’s eyes but she seemed reluctant to hold the gaze. Jen had never said it to anyone before, not even family. She had never lingered for long enough with any of her previous sexual partners for things to have got the chance to become serious. She preferred it that way. She had always liked feeling free, but with Hannah, things felt different.

Hannah was flushed and embarrassed. Jen embraced her tightly.

And she did, at that. To her surprise, Jen found herself growing to like being with one person. She couldn’t stop herself from looking at people that caught her eye and maybe thinking the odd dirty thought, but she knew that at the end of each night it was Hannah that she wanted to feel pressed against her body. Hannah had never been with anyone else and Jen hadn’t tried since that first time after being with Hannah.

Almost by accident Jen found herself realising that more than six months had passed since she had been with anyone else. Somehow it didn’t bother her. This was the most serious relationship that she had ever had with anyone, and to Hannah this was all she had ever had. The transition from being lovers to girlfriends happened without thought. To her surprise, Jen was finding that she could feel comfortable just being with one person. Hannah. Hannah was still awash with the glow of first love.

As Hannah became more comfortable with both Jen and herself she could express herself better and was happier taking the lead. Not that she could imagine herself possessing the almost predatory level of self confidence that Jen had. Anyway, Jen preferred to be in charge most of the time.

Jen didn’t seem scared or nervous about anything. It made it easier for Hannah to act like that too. Just having her there stopped Hannah from being afraid.

Hannah surprised herself with how ready she was to embrace new things now that she had Jen. She had always kept her hair long, consenting only grudgingly to a trim when the ends became too ragged. Following Jen’s example she had most of her hair cut off. She didn’t go to the cropped extreme that Jen favoured though. On the one side her hair reached down to her chin in a shaped bob, on the other side it was cut much closer. It was a strong look that provoked reaction. It was something that she would never have considered for herself before. Hannah’s style of dress changed too. She wasn’t so much copying Jen’s style as becoming more comfortable with herself. More willing to stand out and be noticed by people.

She never used to like attention. She had always preferred to hide in the background. Being with Jen made her like being noticed. They made a beautiful couple and she liked it when people saw them.

It wasn’t just Hannah that gained strength from their being together. Jen had always preferred to keep herself distanced from other people. She found it easier to be detached. She didn’t like to talk about her past or her problems. Living in the now was simpler. Jen found herself able to tell Hannah everything, her secrets, her desires, her pain. With other people she would have felt embarrassed to expose such weakness. She liked being strong and liked people thinking that she wasn’t scared of anything. Telling Hannah these things didn’t make her feel weak. It made her feel stronger.

They were good together and they loved each other.

They had two years together.

One thought on “Hannah’s Story: Part 2, When Hannah and Jen were together”